Want better results?
Tell us your location to refine your search
to help us find listings near you?

In order for us to provide better results for you, you can specify your default location by providing it here.

COVID-19: For important and up-to-date information, please check the websites below:


ACT NSW NT
QLD SA TAS
VIC WA
ACT Diary
Event Completed
The event you have selected has been completed and is no longer available!
To Be Held At

Find out more about this location...
Visit this location on the My Community Directory website. Note, this opens in a new window.

Performing at the Bunbury Repertory Club in December 2019, Dracula, The Vampire Play is adapted by Tim Kelly from the novel by Bram Stoker and promises to be an enjoyable, if a little blood thirsty, evening out.  5 shows only in the first two weeks of December, the audience will be spellbound and terrified of well-known local thespians Shane Trryell and Alli Pyne's portrayals of Dracula and Miss Lucy.   Tickets are available now at www.bunburyrepertory.org.au

When Dr. Van Helsing, a specialist in obscure maladies, discovers that beautiful Lucy Westenra is the victim of a vampire at Dr Quincy's Sanatorium, suspicion falls on a mysterious neighbour, Count Dracula, and his frighteningly beautiful wives. The large cast contains many fine acting parts, from the haunting vampire wives to the ever-popular Renfield, who fancies a diet of flies and spiders. There are young lovers, comic staff members, sanatorium guests and Jonathan Harker, first to fall victim to the vampire's thirst. The story of his journey to Dracula's fortress will have your audiences on the edge of their seats. Intermingled with the drama is a fine thread of comedy that helps relieve mounting tension and chills. Tim Kelly has developed a classic masterwork that always terrifies and delights the cast and audience.

Performances are being held at the club’s home ‘Little Theatre’ Pratt Road, Eaton.

Although the show starts at the time listed there are some pre-show items occurring in the auditorium in the lead up to lights up.  It is worthwhile to arrive at least 30 minutes early as a sneak peek at some of the characters will be had as they wander the audience and foyer in character. 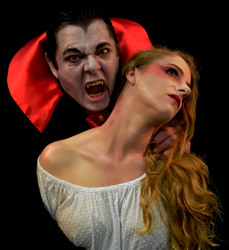